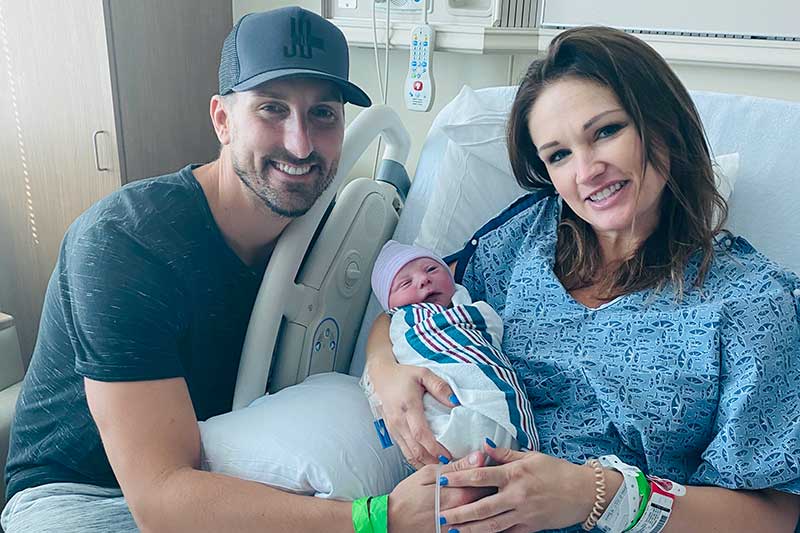 NASHVILLE, Tenn. – After nine months of pure bliss and anticipation, rising country music singer/songwriter JD Shelburne and his wife Amy Jo brought their first child, Jax Dillon Shelburne into the world. Weighing in at 7 lbs 1oz and 20 ¼ inches long, baby Shelburne and mother are both healthy and doing great. The Shelburne family rejoices at the arrival of little Jax; their newest pride and joy.

Photos exclusively premiered through American Songwriter and can be seen HERE.

“As first-time parents, we are so overjoyed about welcoming our son Jax into this world. It has been an amazing experience and we are so thankful for him. We thank God for his blessing and our family, friends, and fans for all the support and love along this journey,” beams Shelburne.

To keep up with baby Shelburne and family, follow JD’s socials linked below!

About J.D. Shelburne:
Nashville-based country music artist J.D. Shelburne was raised on a tobacco farm in Taylorsville, Kentucky, just outside of Louisville. When J.D. was 19, he found a guitar after the death of his grandmother. He quickly learned how to play it, and began writing and singing songs on his own. By his sophomore year of college, he had found a few gigs at some local bars in Louisville & Lexington, Kentucky area venues, developing a large base of fans along the way. Fast forward to today, J.D.’s latest album Two Lane Town, is building upon his blossoming career as a modern country singer, songwriter, and performer. His debut single and video for “One Less Girl” world premiered on CMT in 2018, and then went on to become a Top 30 Music Row charted song at country radio. CMT again world premiered his second song and video for “She Keeps Me Up Nights” in April of 2019, which peaked at #3 of their 12 Pack countdown series. At the close of 2019, Shelburne joined international superstars like Lewis Capaldi and Billie Eilish on BandsInTown’s year-end fan favorites list — for playing more shows in 2019 than any other artist on their social networking platform! A global accomplishment for a country boy from rural Kentucky. JD’s latest video for “Church Pew Bar Stool” was top-3 for the past couple of months on CMT’s 12-pack countdown.

To keep up with new music and upcoming show announcements visit www.jdshelburne.com.