JD Shelburne To Host Free ‘LIVE On The Street’ Concert in Bloomfield, KY on Saturday, June 4 at 7pm 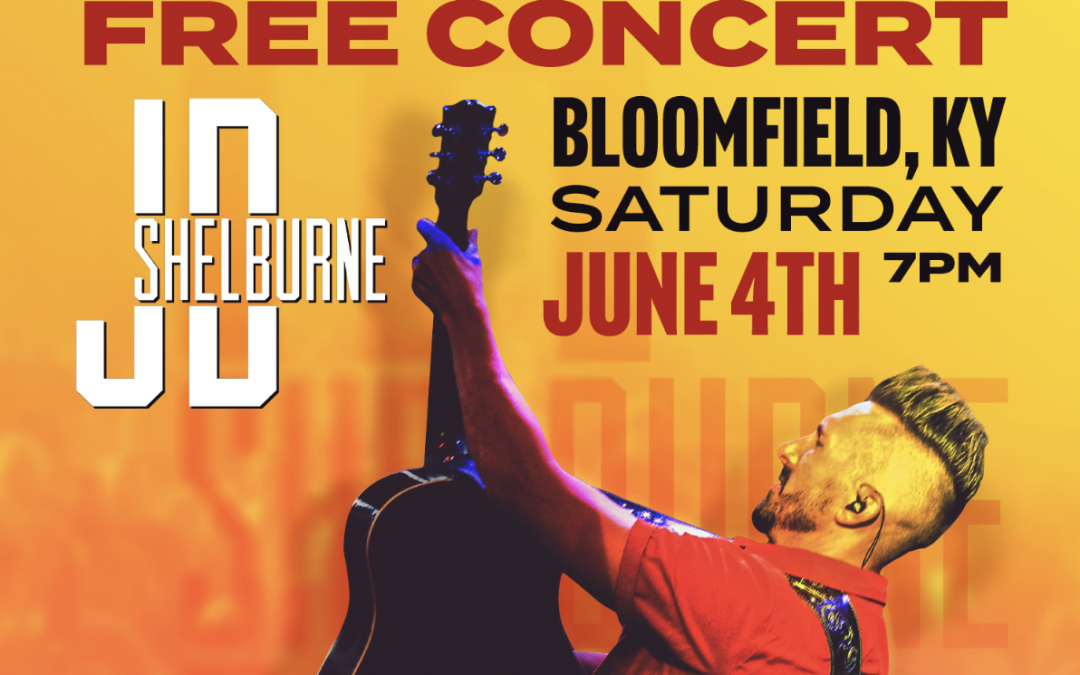 BLOOMFIELD, Ky. – Country music singer/songwriter JD Shelburne is excited to return to his home state for a special ‘LIVE On The Street’ free concert in Bloomfield, Kentucky. The event will kick off at 7pm with openers Julia Hood of Scarecrow Band and Layla Spring of American Idol at 7:35pm, followed by Shelburne at 8:15pm who is sure to have the crowd on their feet with fan favorites and original songs off his latest album, Straight From Kentucky, including “Hometown In My Headlights,” “Church Pew Barstool”, and more. Bring friends and family over to Bloomfield for an unforgettable night of music, entertainment, and fun!

“I am so thrilled to bring our live show for the first time to the city of Bloomfield, KY on Sat June 4th! Last year’s album release concert set a record in my hometown with attendance and many of my fans asked about bringing that show to other small towns,” shares Shelburne. “Bloomfield has been on my radar for years since building my career and fan base. I am thankful to Bloomfield Farms for backing the entire show, so we are bringing the full production for the fans. Growing up in Kentucky, I spent many days driving through that town and even attending the Tobacco Festival which no longer exists. I am excited to bring a free concert and a day of celebration to the city of Bloomfield for the people. We can’t wait to see you flood the streets and spend time with your friends and families listening to songs from my top ten album!”

Shelburne recently released the music video for “Fine By Me,” off Straight From Kentucky. Shelburne is pictured strapped with an acoustic guitar, carrying out the song’s affectionate lyrics of being proud to be seen next to his beautiful counterpart. Whether they’re spending the night on the couch or getting dressed up for an evening out, Shelburne proves that beside every great man stands an equally amazing woman. You won’t want to miss Shelburne on stage in Bloomfield!

His debut single and video for “One Less Girl” world premiered on CMT in 2018, and then went on to become a Top 30 Music Row charted song on country radio. CMT again world premiered his second song and video for “She Keeps Me Up Nights” in April of 2019, which peaked at #3 of their 12 Pack countdown series. In 2020, Shelburne was featured on the cover of the 2020 Kentucky Tourism Visitor’s Guide, Kentucky Living, and was the May Artist of the Month for Texas Roadhouse. JD’s video for “Church Pew Bar Stool” hit #1 on CMT’s 12-pack countdown and he was recently honored with a display at the Kentucky Music Hall of Fame as well as a formal acclamation from Governor Andy Beshear of Kentucky, honoring JD Shelburne for his accomplishments in country music. Shelburne has graced the stage with over 60 National Acts including ZZ Top and has been featured in People Magazine, Taste of Country, Billboard and more! His new album Straight From Kentucky is available now.