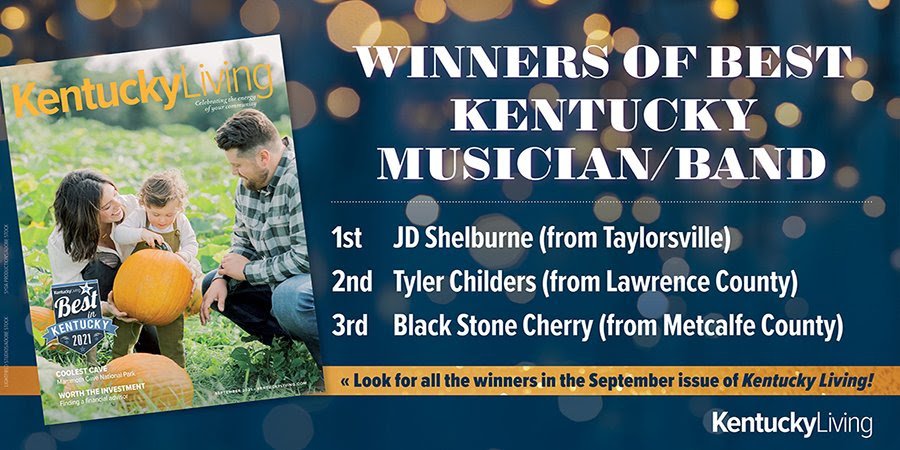 LOUISVILLE, Ky.- Country music standout JD Shelburne has been presented as the winner of “Best Kentucky Musician/Band” by Kentucky Living Magazine as part of their 2021 “Best in Kentucky” awards. Each year, the magazine celebrates everything about their great state with categories ranging from destination, eats and drinks, outdoors, shopping, and of course entertainment. Kentucky fans have spoken and have voted for Shelburne as their number 1 artist, with Tyler Childers taking second place and Black Stone Cherry in third. Past recipients of this award include Chris Stapleton, Jericho Woods, the Kentucky Headhunters, and the Penny Loafers. Shelburne’s surprise presentation of the special award is posted on the magazine’s website and YouTube channel.

Visit HERE to watch the 2021 Best in Kentucky show and for the complete list of winners.

“I am so honored and humbled to be the 2021 winner of the Best Kentucky Musician/ Band! I can’t even believe this,” says Shelburne. “I know how many artists fill our great state with tremendous talent and to win this award has made my summer! Thank you to all my fans who voted for this. I have a special place on my wall for this award. I am so proud to represent our great state as ‘Best in Kentucky!’” shares Shelburne.

Shelburne is set to take the main stage in his home state at the Kentucky State Fair on Saturday, August 28th for the Texas Roadhouse Concert Series with EXILE and Jameson Rodgers, as well as performing as a featured artist at the Pepsi Plaza Concert Series at the KFC Yum! Center on Thursday, September 9th. He will be playing music and fan favorites from his latest album, Straight From Kentucky, including “Church Pew Barstool,” and “Hometown in My Headlights.”

Shelburne has taken the music industry by storm, having features in CMT, GAC, People, Newsmax, and NBC. With fans always wanting more, he continues to deliver by dedicating time to the studio and a busy tour schedule. Shelburne graced the cover of the 2020 Kentucky Tourism Visitor’s Guide which shares travel tips, stories, and regional highlights for tourists and visitors.

After building close bonds with fans through live virtual performances, he has announced several upcoming tour dates listed below. Shelburne has a lot in store for the upcoming months that country music fans will not want to miss!

“So excited to headline the Pepsi Plaza at the KFC Yum! Center near my hometown. I am humbled to be chosen for the concert series at one of the most prestigious arenas in the area. It’s an incredible feeling to get a call for these types of headline gigs,” shares Shelburne.

To keep up with JD Shelburne, follow his social channels linked below.