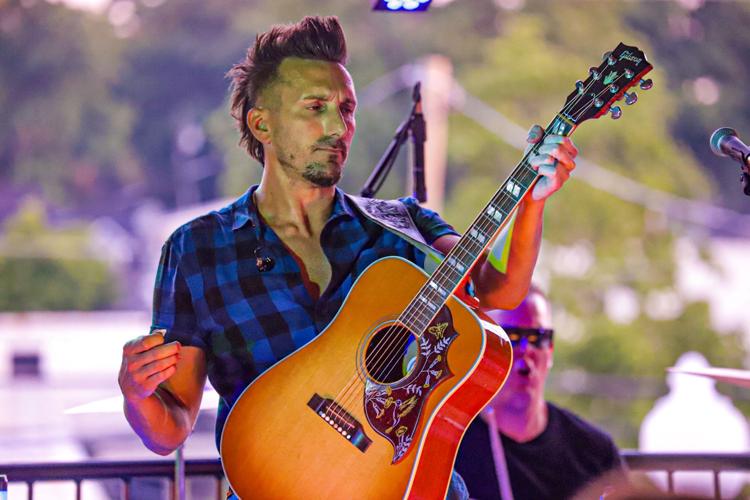 Shelburne drew a large enough crowd that it was necessary to shut down Main Street between 5th Street and 7th streets. Because not everyone was able to fit in the plaza, or in front of it, the city provided a screen for those who didn’t make it in time to get a good seat.

Various local food trucks were set up along Main Street for hungry concertgoers, providing a music festival type of atmosphere. There was also a group of people playing cornhole at 6th and Main streets before and during the show.

The concert lasted two hours and featured a number of memorable moments. One of those moments was when Shelburne left the stage during an instrumental section of the band’s set. He walked through the plaza and out to the street to give fans in the back a better view. During this off-stage venture, Shelburne stopped to shake hands and pose for selfies with his elated fans.

Some of the other memorable moments included guests that were brought on stage. The first was Darrin Jacques, a man of such height, Shelburne joked that he “thought he played for the Shelbyville Rockets.” Jacques is one of the survivors of the Carrolton bus crash. Shelburne was a touched by the man’s resiliency and attitude, and wanted to introduce his new friend to the audience.

The second guest was Shelburne’s mother, Jane. The two sang a harmonious duet, “Love Can Build a Bridge.” Shelburne’s family has played an important role in his music career. He inherited his voice from his mother, but it was his grandmother that led to him choosing to be a professional singer.

Shelburne recalled the moment were his life went in a different direction than originally intended. “I moved to go to college in the fall of 2001. I’d been in college a semester or two and my grandmother in Taylorsville passed, suddenly. Through the course of her death, coming back for her funeral, I ended up finding a guitar in her house that she had, and that’s kind of what started my journey.”

The Taylorsville-born songwriter moved to Nashville in 2008 but has remained active in Kentucky throughout his career. The concert had been in the works for some time and proved to be a major draw for local residents.

Shelburne became a Nashville resident 14 years ago in hopes of growing his career. “I knew one person in Nashville,” he stated in an interview, “and that person really didn’t help me. So, I was really forced to come down here on my own and see if I could make it. Nashville is really were I started to turn some heads and start to build a fan base back in Kentucky.”

The singer has played a number of shows in Shelbyville, including the Horse Show, the Shelby County Fair, and Bennett Farm. When asked about Shelbyville, Shelburne said, “I had some family that lived there. I remember, I used to play Babe Ruth Baseball in Shelbyville every summer when I was a kid. I played there a lot. It was kind of like my second home when it came to sports, and I tell everybody, Shelbyville has the closest Walmart.”

Shelburne’s fame stared picking up momentum over the past few years, though the pandemic did provide obstacles. “I had quite a bit of success until the pandemic and 2020, when the pandemic happened, I was featured on the cover of the state tourism guide.”

“So, looking back, in February of that year, I got invited to the governor’s, to the capital for a ceremony hosted by the governor unveiling of the tourism guide. So, my career was skyrocketing. I was getting calls, so many festivals, fairs, shows and then the pandemic happens about a month later. Things started shutting down and I ended up loosing 80 festivals.”

Despite the challenges of the lockdowns, Shelburne still managed to see the bright side. “As you can imagine, it was very sad losing all that work, but at the same time, it allowed me more time with my family and that was worth more than any dollar I’ve ever made. So, we were able to prepare for the birth of our first son and we bought a new home. It gave me time to do other things, which was kind of a Godsend for us.”

Shelby Main Street, Larry Baker with Realty Advanced, Chris Smitha Barns, and Shelby Life Magazine, sponsored the concert. The sponsors were in attendance in the reserved section of Stargazer Plaza. Mayor David Eaton and Judge-Executive Dan Ison were also among the family and sponsors sitting by the stage.

Shelburne has five upcoming concerts in Louisville. The next one will be a Norton Commons – Charity Cure CF Inc in Prospect on July 16. On July 21, he will be playing Joe’s Older Than Dirt in Louisville. On the July 23, Shelburne is playing a private event at Nolin Lake in Litchfield. On July 30, he is playing at a Kentucky Farm Bureau event in Lexington, and he will be returning to Joe’s Older Than Dirt on Aug. 5.