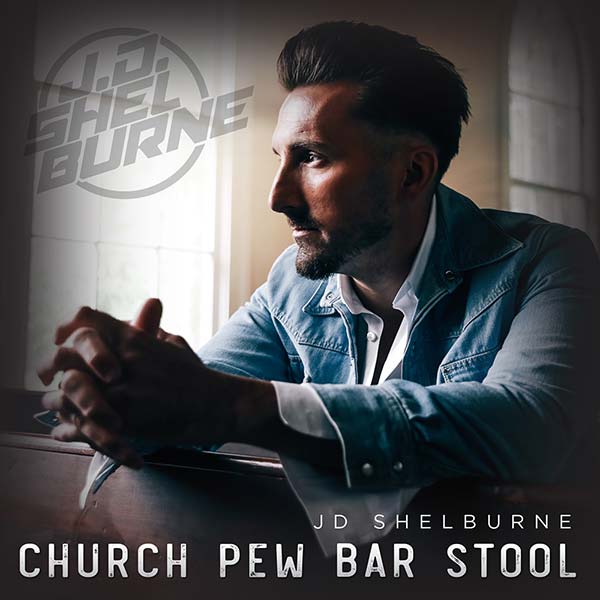 NASHVILLE, Tenn. – Country music singer/songwriter J.D. Shelburne delivers every ounce of country sound needed to light up the airwaves with the release of his latest single “Church Pew Bar Stool.” Coming in hot like a southern summer, Shelburne’s single hits close to home while starring as a staple in every country playlist. The “Church Pew Bar Stool” music video exclusively premiered on CMT Music and CMT.com on July 1st to a worldwide audience. The single is now available on all streaming platforms for fans to enjoy.

“I am so thrilled and honored to get a World Premiere on CMT – the most well-recognized video platform in country music,” says Shelburne. “I grew up watching CMT as a kid and all through college, dreaming of one day having my video featured. CMT was one of my top goals as an artist to reach when I moved to town back in 2008. Thank you to the staff at CMT for believing in my music. I am forever grateful for their support.”

The clever lyrics of “Church Pew Bar Stool” allow listeners to reminisce conversations with familiar faces on late nights in a whiskey soaked, southern bar lit by flickering beer signs. While drawing a line of symmetry between a church sermon and a honky tonk homily, Shelburne pulls fans into a timeless story-line just in time for careless summer nights where they may find themselves sitting on their own ‘church pew bar stool.’ In addition to this new release, Shelburne was named by Texas Roadhouse as May’s ‘Artist of the Month’ nationwide. His latest single, “Straight From Kentucky” was featured in all locations seeing over 20,000 guests each month. With plans to release his next album, ‘Straight From Kentucky’ this fall, country music fans will not want to miss what this elite entertainer has in store for the coming months!

About J.D. Shelburne:
Nashville-based country music artist J.D. Shelburne was raised on a tobacco farm in Taylorsville, Kentucky, just outside of Louisville. When J.D. was 19, he found a guitar after the death of his grandmother. He quickly learned how to play it, and began writing and singing songs on his own. By his sophomore year of college, he had found a few gigs at some local bars in Louisville & Lexington, Kentucky area venues, developing a large base of fans along the way. Fast forward to today, J.D.’s latest album Two Lane Town, is building upon his blossoming career as a modern country singer, songwriter and performer. His debut single and video for “One Less Girl” world premiered on CMT in 2018, and then went on to become a Top 30 Music Row charted song at country radio. CMT again world premiered his second song and video for “She Keeps Me Up Nights” in April of 2019, which peaked at #3 of their 12 Pack countdown series. At the close of 2019, Shelburne joined international superstars like Lewis Capaldi and Billie Eilish on BandsInTown’s year-end fan favorites list — for playing more shows in 2019 than any other artist on their social networking platform! A global accomplishment for a country boy from rural Kentucky.

To keep up with new music and upcoming show announcements, follow J.D’s socials linked below or visit www.jdshelburne.com.