J.D. Shelburne Announced As May ‘Artist Of The Month’ At Texas Roadhouse Nationwide 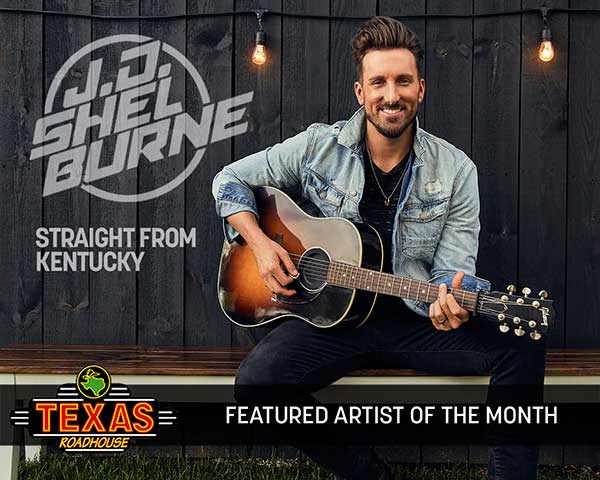 NASHVILLE, Tenn. – Country music singer/songwriter J.D. Shelburne has been named by Texas Roadhouse as May’s ‘Artist of the Month’ nationwide. His latest single, “Straight From Kentucky,” written by J.D. Shelburne, Phil O’Donnell and Tyler Booth will be featured in all 587 locations, seen by over 20,000 guests at each store every month. Former Artists of the Month include John Pardi, Kelsea Ballerini, Granger Smith, Kenny Chesney, Kacey Musgraves, Justin Moore, George Strait and more.

“We are excited to have J.D. on board as our Artist of the Month for May,” says Travis Doster, VP of Communications for Texas Roadhouse. “We are also proud to continue the tradition of promoting rising country stars and letting our guests listen to great music, while enjoying a great meal.”

“As a long-time fan of the Texas Roadhouse brand, I’m so excited to be featured as the May Artist of the Month! This will be my first nationwide promotion. I am thrilled to know that when people dine-in at nearly 600 restaurants nationwide, they will get to hear my music and hopefully become fans. This is another great achievement in my career. I am so excited to be featured by Texas Roadhouse” says Shelburne.

In addition to being the Texas Roadhouse Artist of the Month, Shelburne was selected to be on the cover of the 2020 Kentucky Tourism Guide and was recently featured on the cover of the Kentucky Living Magazine’s April Edition. This well-known magazine will be sent out to 460,000 homes and will instill Shelburne’s admirable sense of state pride in the hearts of many. Along with being featured, Shelburne is one of three finalists in ‘Kentucky Living Magazine’s 2020 Best in Kentucky Awards’ for the category, Kentucky Musician/Band.

To vote for Shelburne as best Kentucky Musician in the ‘Kentucky Living Magazine 2020 Best in Kentucky Awards’ click here.

As one of Nashville’s most popular honky tonks, ‘Ole Red’ has announced that Shelburne has been picked to be a part of their new social distancing series ‘Quarantunes.’ This is a self isolation playlist that features artists that frequently perform live at Ole Red including Blake Shelton, Gwen Stafani, Sundance Head, Ryan Griffin, Ricochet, Rae Lynn, Craig Wayne Boyd, The Swon Brothers, Vince Gill and more.

To listen to the Quarantunes playlist, visit here.

Shelburne has been working nonstop in the studio to bring fans new “windows down” country tunes for the upcoming months. His new album, produced by Phil O’Donnell, will be released in the Summer of 2020. The release will be celebrated back in his hometown ​with a FREE show for fans in Taylorsville, Ky. on Saturday, August 8th. This stand out country artist proves his genuine grit and dedication by continuing to keep the music alive for fans.

To keep up with tour dates and information, follow Shelburne’s socials linked below.

About J.D. Shelburne:
Nashville-based country music artist J.D. Shelburne was raised on a tobacco farm in Taylorsville, Kentucky, just outside of Louisville. When J.D. was 19, he found a guitar after the death of his grandmother. He quickly learned how to play it, and began writing and singing songs on his own. By his sophomore year of college, he had found a few gigs at some local bars in Louisville & Lexington, Kentucky area venues, developing a large base of fans along the way.

Fast forward to today, J.D.’s latest album Two Lane Town, is building upon his blossoming career as a modern country singer, songwriter and performer. His debut single and video for “One Less Girl” world premiered on CMT in 2018, and then went on to become a Top 30 Music Row charted song at country radio. CMT again world premiered his second song and video for “She Keeps Me Up Nights” in April of 2019, which peaked at #3 of their 12 Pack countdown series.

At the close of 2019, Shelburne joined international superstars like Lewis Capaldi and Billie Eilish on BandsInTown’s year-end fan favorites list — for playing more shows in 2019 than any other artist on their social networking platform! A global accomplishment for a country boy from rural Kentucky.

To keep up with new music and upcoming show announcements follow J.D’s socials linked below.